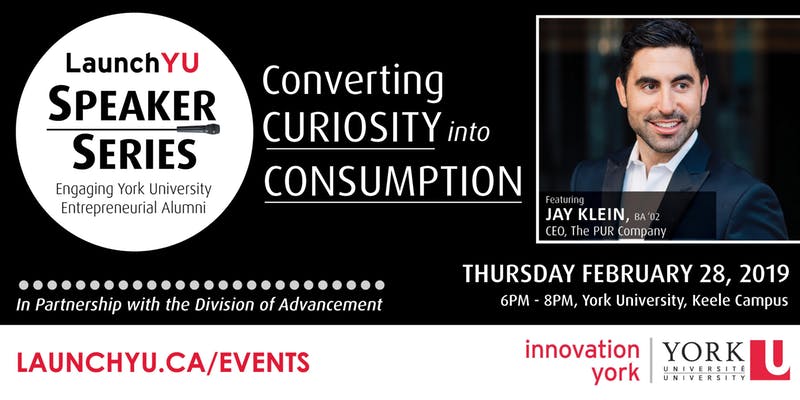 Each part of the series will aim to capture the real stories, challenges, successes and failures that they have encountered in their journeys.

These talks are meant to INSPIRE, MOTIVATE, and EDUCATE the audience on the realities of launching a startup in today’s world.

Jay Klein is a born entrepreneur who lives by a philosophy that with hard work and perseverance, everything is possible. Among Jay’s passions are marketing, entrepreneurship, and business – which he uses to inspire those around him daily. Jay’s vision was to develop a chewing gum free from chemical sweeteners, and safe for individuals with any allergies or dietary sensitivities. Having made this vision a reality with PUR Gum, he is on a mission to motivate and educate people around the world while providing them with great-tasting, high quality products.

The PUR Company launched in 2010 with PUR Gum after leading a team of professionals at Drivertise International, the first company Jay started in 2001. After he succeeded in selling his first pack of gum, he challenged himself to transition his small accomplishment into a full-fledged business, which has now become the #1 selling aspartame-free brand worldwide. Having expanded its product line with Mints and Popcorn, The PUR Company is a global leader in the continuously growing health food and better-for-you industry.

Jay’s optimistic creativity was developed at a young age, selling candy out of his backpack in the 6th grade. He moved from Florida to Toronto in 1998 to attend York University. He graduated in 2002 with a double major in Political Science and Communication with honors. Klein was the recipient of the 2014 Ernst & Young Entrepreneur of The Year, Emerging Entrepreneur Award. Jay is a member of Young Presidents’ Organization (YPO) and in addition to his professional achievements, sits on the Board of several charitable organizations that support the youth and Jewish community.